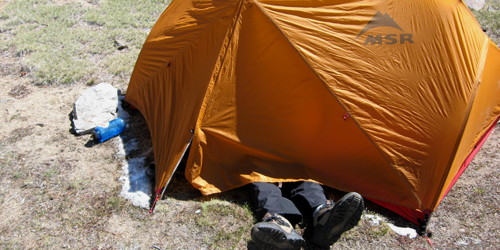 “You are being both cruel and tyrannical. You need to get out of town for a few days.”

Such were the words of one Susan Blakeslee, in direct reference to her heartless, vicious youngest son and esteemed RTEF Director. Never one to argue with the sage perceptions of his mother, and given the date on the calendar, Jonathan rang me up and suggested we follow up last year’s successful inaugural Summer Solstice Expedition with a sequel. Three days, Green Lake, it all sounded good.

As with all of our trips, J and I started out in the always-faint hope that we could convince some friends to come with us. Since Robin had other commitments for the weekend, she was already a disgruntled no-show, though she cheerfully (not) loaned us her tent (second straight year) and water filter. Thanks, hon!

Not for the first time, certainly not for the last, our recruiting efforts were eventually rebuked by all, which is pretty much par for the course. For some, the Excuse Bag is ever-full. But in a dramatic and stirring turn of events, our longtime friend Sean aka “Egg” was granted a last minute furlough by his parole officer, and suddenly we had a third. The fourth member of our troop was an easy sell; Jonathan’s 3-year old labradoodle, Nelson, cheerfully agreed to come along.

Heading up the trail, Sean’s constant warnings about being out of shape were hardly well-founded; the former cross country runner was doing just fine, in between hits on his oxygen tank. But what he hadn’t warned us about was his ailing sense of direction. About a mile into the hike, J and I shrewdly observed that one of our party had gone missing. Meaning, we’d somehow lost one person when there were only three of us to begin with.

At first, we held station and figured that Egg was just taking a water break, adjusting his pack, or watering the landscape. Five minutes turned to ten, to fifteen, and still no sign.

“Should we drop packs and go back down the trail?” queried J, ever the overly concerned and responsible one.

“Let’s just try shouting first,” I responded, ever the overly cynical and lazy one.

This proved a worthy measure, as our shouts were immediately returned from a rather distant Sean, who’d taken a mild detour and was now on the other side of the narrow valley, perhaps 130 yards away. He altered course and began ambling back towards us.

“He gets a mulligan,” Jonathan correctly noted. “He actually came on the trip, after all.” I nodded my agreement.

Ever-affable, Sean rejoined us on the trail with a grin and a couple self-effacing remarks. It was hardly a cause for concern, as the valley only ended up in one place: our destination, Green Lake. We crested a small ridge and our two night home came into view. “Must be green in a different light,” I commented, admiring the blue alpine waters of the lake.

It soon became clear that the gusts of wind that we’d experienced on the trail were harbingers of a stronger blowing that had no plans of subsiding. As a nerdy Sierra Club weenie might put it, we had a full fledged “wind event” on our hands. Temperatures in the 40s made for a chilled evening, so we cooked an early dinner of ground round with seasonings and retreated to our tents.

The weather that night was rather severe, as 45 mph winds, sub-freezing temperatures, snow, hail, sleet, rain, and distant thunder combined for a long night. Sean, who was my tentmate on this trip, didn’t hear a thing, as the dude can sleep through an aerial bombardment. I even kicked him a few times in an attempt to wake him up, to no avail. I finally dozed off.

At some point around 2 AM, Sean woke up screaming at the top of his lungs, his wails drowning out the thunder of the storm. For the record, when you’re sharing a tiny two-man tent, it’s a bit unsettling when your tentmate starts crying like a banshee. What could it be? Bear? Mountain lion?

Finally, I was able to decipher the words amongst his screams.  “It’s Summer Glau!!! It’s Summer Glau!!!” he shrieked again and again, his voice rising over the wind, each time with considerably less fear and considerably more enthusiasm. Finally, his wails were reduced to happy whimpers, and after putting all the knives out of his reach and placing a padlock on my sleeping bag zipper, I nervously nodded off a scant 90 minutes later.

Next morning, big surprise, Sean claimed no remembrance of his dream, though he did issue a strong lawyeristic denial. “If anything, I was shouting ‘it’s summer now!'” he offered weakly. “Because , uhh, you know, it’s the solstice and all!

Jonathan, Nelson and I spent Saturday on a day-hike up to a stunning view of Cloudripper Peak, while Sean relaxed in camp and pretty much read an entire book. It was good to see him enjoying that which had long been a mainstay of his existence, but not at all in recent years.

Next morning it was still mildly windy, but we showed no eagerness to start the return hike. In fact, Jonathan even set up a fishing pole for Sean, and the two of them, with Nelson’s assistance, spent some of the morning quietly fishing Green Lake, while I took the opportunity to hike the entirety of its perimeter.

An easy hike back to Sean’s truck, an easy drive back home, and we’d completed the Second Annual Summer Solstice Expedition. Last we saw of Sean, he was complaining about his sore fee while he attacked the rear seats of his truck with an underpowered hand vacuum, in a desperate but ultimately vain attempt to suck up all of Nelson’s white hair upon the black upholstery.