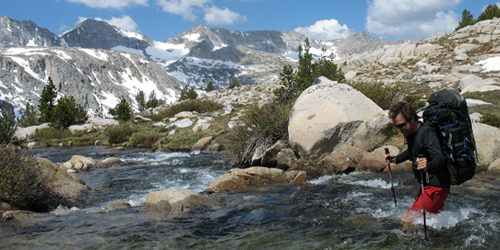 “Won’t need a second water filter, huh?” I dryly remarked, looking on as Jonathan held the Miniworks ceramic element in his hand. Or perhaps more accurately, in his hands, as the element had crumbled into a dozen pieces.

Here we were, at the trailhead near North Lake, not yet one stride into our trip, and already we had a gear failure. Certainly, one water filter should have been enough for two guys making a three day trip. Certainly, we’d never had one fail before. Certainly, now we were facing the inevitability of giardia, salmonella, cryptosporidia and god knows what else.

Okay, not really. As with many such moments on our trips, we completely overblew the significance purely for our own comedic enjoyment. We were (mostly) secure in the knowledge that we (i.e. Jonathan) were bringing plenty of extra fuel for the stoves, and that we could therefore boil water. But it was the type of moment we could gleefully share with our skeptical loved ones who always question our poor judgment while in the wilderness, and reinforce their beliefs that we’re reckless and unprepared.

Which, in this particular case, was rather ironic. The whole purpose of this three day adventure, nicely coinciding with the long days of the summer solstice, was that we wanted to prepare for our upcoming 70+ mile High Sierra Trail expedition in about six weeks. Both of us had some new gear that we wanted to field test (stoves, sleeping bag, sleeping pad), some old gear that needed double-checking, and certainly it was better to experiment with such things on a two-nighter rather than on a nine day trans Sierra. Oh, and of course, we just wanted to squeeze in some extra wilderness time.

Destination for this bonus trip was to be up and over Piute Pass and into the Humphreys Basin region of the Eastern Sierra, during the third week of June. As ever, J and I had made the usual attempts to invite certain people on this easy trip. There were no takers. Even m’dear Robin had to bail out, as it was the weekend before her finals. So, once again, it was a two man recon team who had piled into J’s Tacoma and blasted up 395. And, with just the two of us, we forsook the usual late night Bishop hotel room and instead slept at the trailhead, allowing us to get a theoretically early start.

No question, the approach to Piute Pass was one of the most exquisite* (copyright: JLB) we’ve ever seen, and we marked a couple of nice small lakes for possible swims on the return hike. At the top of the pass we decided it was a good place for a snack, cold breeze and all. The impressive winter guaranteed no shortage of snow, and expected overnight freezing temperatures were to be a perfect testbed for my new light weight sleeping bag.

We had originally planned to camp near Desolation Lake, which lies somewhat northwest of the pass. To get there, we opted to abandon the trail and go cross country, as we could clearly see our destination in the distance. Yet as we walked ever closer, we began to see that to the south, and several hundred feet lower, there were a series of lakes with plenty of tree lined shores. Desolation Lake, dead ahead of us, looked to be above the treeline, barren of foliage, and looked… well… aptly named. With the splendor of Upper and Lower Golden Trout Lakes beckoning from below, we needed no convincing to abandon our plans for Desolation.

We continued our cross country travel, aiming towards the lakes while picking our way through streams and small snowfields. Having traversed one final stream in order to isolate ourselves from any potential neighbors, we settled upon a beautiful site on the shores of Lower Golden Trout Lake.

Ain’t no lie… we were beat. We’d expected 7-8 miles and, with our aimless wandering, ended up doing close to 10. Upon choosing our site, we dumped our packs and immediately set to the task of pitching the tent and cooking supper.

Speaking of the tent, Robin was kind enough to loan us her MSR Hubba Hubba. Rewind, four days…
Me: “Hon, can I borrow your tent?”
Robin: “Oh, I see. Go on a trip without me AND take my tent?”
Me: “I love you!”

We got supper cooked and inhaled, agreed that we were both whipped, and called it a night.

Next day was a combination of clouds and sunshine, spotty rain and warm rays. We dedicated ourselves to a day of exploration of this basin and some fishing for J, so we had our breakfast, fed a friendly marmot who we named Marko, packed up some snacks, kept our rain gear handy, and headed out.

We picked our way downstream from our campsite and Lower Golden, and the terrain dropped away from us, causing streams to become roaring rapids and chutes that emptied into the beauty of Piute Canyon. Enjoying the view for a long few minutes, we then made the blood oath. “One day, we shall climb up this canyon from the other end.” (See: Evolution Valley – 2011)

Having explored the bottom end of the basin, we headed back up to check out its headwaters and to continue onward to Upper Golden. Along this stretch, Jonathan made a mockery of the local trout population, pretty much reeling ’em in on every cast.

Our day of easy hiking turned into something a bit longer, as it always does, and we enjoyed the extensive daylight afforded by this time of year. Not content with lake exploration, we clambered up a hillside and followed a raging chute of run-off water up to the top of another hill, and lo and behold, spotted the trail that we should have been on from the previous day. We marked its location and trudged back down to camp for a late sit-down to watch the sun cast its final glow upon the surrounding peaks.

All too soon, morning came and we debated the possibility of extending the trip an extra day. There was plenty of food (isn’t there always?), there was plenty of desire, but we chose not to put our loved ones through the dismay of us showing up 24 hours late. And they say we’re inconsiderate. Reluctantly, we pack it all up, take a quick swim in the Lower Golden, and head back toward the pass.

Another swim was mandated as we descended the trailhead, the chilly temperatures of the basin giving way to the warm heat that bakes the greater Bishop area even during the early summer weeks. We returned to the trailhead/parking lot, dumped our packs, and took one more rinse-off in the nearby stream before saddling up and hitting the road for the five hour drive back home.

“Good trip,” I ventured, as we navigated the barren wasteland known as Route 14 near Rosamond. “Nice to have the really long days provided by the solstice.”

Jonathan, through bites of Western Bacon Cheeseburger, grunted his agreement. “Maybe we should do this next year.”