Hollywood A-list directors Joss Whedon, Christopher Nolan and Ridley Scott staged a poorly-attended three-man protest in downtown Los Angeles today, marching in anger over the recent media blackout that has descended upon their three films. Even though “The Avengers” “Dark Knight Rises” and “Prometheus” are among the summer’s most anticipated movies, global news outlets have largely ignored the films in recent days.

Sources have now confirmed that the reassignment of the world’s media has been attributed to the long awaited announcement regarding the Red Tomahawk 5th Annual Summer Solstice Expedition.

The Associated Press and Reuters both reported record web traffic earlier this morning, as once again, the Directors of the RTEF had sequestered themselves in a top secret southern California location, reviewing the hundreds of applications sent in from state and national parks, all pleading to be chosen as this year’s destination. 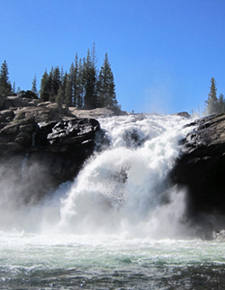 Details finally emerged late this morning: this year, the RTEF shall travel to Yosemite National Park for an extended four day sojourn through the Grand Canyon of the Tuolumne. This famed route begins in the majestic area of Tuolumne Meadows and follows the Tuolumne River for almost 30 miles, down through deep canyons with roaring waterfalls and enticing swimming holes.

From the meadows, the RTEF shall travel a short section of the Pacific Crest Trail as they reach the Glen Aulin High Sierra Camp; from there, it’s down, down down past Le Conte Falls, Waterwheel Falls and into the heart of the canyon. Down more to Pate Valley where the trail bottoms out at elevation 4380, and then a tough climb to White Wolf and trail’s end. 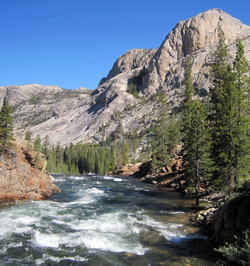 This route has been on the RTEF itinerary for some time; in September 2009, the RTEF had a permit all set to go, until a late season fire closed the trail and the expedition was indefinitely postponed. In typical expedient fashion, the RTEF took only 31 months to reschedule.

The privileged few within the Red Tomahawk Expeditionary Force should be receiving invites to their Inbox within hours, according to the RTEF BoD. No reports as to whether Nolan, Whedon or Scott are on the invite list.