Wednesday, June 15, 2011. We finally depart Pasadena at 8:30 PM, and none of us have eaten dinner. Some things never change. A 12:30 AM arrival to our Fresno hotel is predicted, taking into account the inevitable In ‘N’ Out stop. 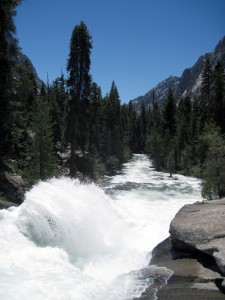 Reasonable departure from hotel, yet breakfast is no longer being served upon our arrival at Grant’s Grove. Crud. An early lunch of BLTs and burgers is settled upon. The final drive to Road’s End is ripe with stops to take photos of the record snow pack that’s resulted in record run-off. The Kings River is a foaming, rapid, pissed off beast, and we can’t take our eyes off it. We finally reach the parking lot at Road’s End and are on the trail at 1:45 PM, an all-time record late departure for the RTEF. Who cares? We’re on vacation, you Sierra Clubbing “Two Minutes!” Wanna Be Do-Gooders.

The late departure works in our favor… sort of. Our trail is mostly in the shade while the sun beats upon the opposite side of the canyon, a good turn of fate on this very hot day. Progress is somewhat slow, as it was on the drive into the park, as the staggering amount of run-off and roaring water is a good, constant distraction. Waterfalls tumble off the canyon walls on all sides of us. None of us have ever seen anything like this before. 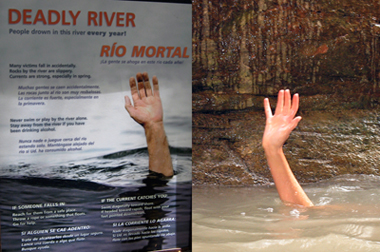 Downside of the late departure comes later, as the river rises with the warmth of the day, and parts of the trail are several feet under water. No matter, we blaze around it and complete our 6.5 mile trek into the lower camp of Paradise Valley.

Successful rendezvous with RTEF Recon Team 1, led by Director Silva. A good campfire already going, she relates her past three days of adventure accompanied by Cadet Jamie Kelly. The cadet, cleverly disguised as a backpacking neophyte, looks the comfy veteran as she relaxes in her Crazy Creek at fireside. First night’s meal consists of spiced cubes of ribeye and refried beans. A campsite over and someone is cooking noodles. Blech.

Farewell to Silva and Kelly as their trip ends today. Our quartet forges onward, with stream crossings and avalanche/snow damage rampant along the trail. The number of fallen trees, crushed by avalanches or merely collapsed under the weight of winter’s snow, is staggering. At times, our trail simply vanishes beneath a dozen fallen pines, or heaps of boulders. It would have been simply awesome to have witnessed some of this destruction… you know, from a helicoptor or other safe vantage point.

We bypass the middle and upper camps of Paradise Valley and continue on the trail toward Castle Domes. Very slow going now, so much trail damage, stretches of a hundred yards and more of trail have just disappeared beneath the rubble. About 2 miles above upper Paradise Valley, we find a suitable spot for the night, our energies spent. It’s been a mentally tough day, constantly bush-whacking and maneuvering with 35-45 pounds on the back.

A good fire is made, and a meal of chicken and stuffing and craisins gets inhaled. 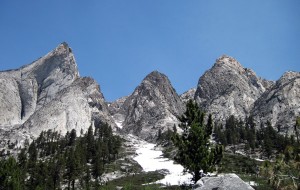 Carney opts out of our day hike to Castle Domes and the JMT trail junction; he stays behind to watch over our camp and read his book. He receives zero shit. He’s here, he gets his day off to do nothing. Besides, there will be PLENTY of other things to harrass him about.

It’s unfortunate, because this stretch of trail is visually rewarding like nothing else on the trip. Once finally clear of downed trees and raging stream crossings, we break through into some meadows with sensational views all around. We continue until we reach the junction with the John Muir Trail, where an ultra-cool suspension bridge awaits us. If you don’t like goofing off and playing on suspension bridges, you’re a communist. You probably hated Tom Sawyer’s Island at Disneyland, too.

We return from our day hike around 4:30, saddle up with packs, and start the brief 100 minute hike back down the trail toward the secret campsite “Weathertop.”

*insert a bunch of  “owwws!” as Jonathan and Sean take separate routes and Sean gets attacked by mosquitos. Screams of “Fuck, they’re eating me alive!!!!” echo off the canyon walls. Five minutes go by.*

Jonathan: (shouting, at the top of his lungs) “Sean, can you hear me?”
Sean: (in the distance, barely perceptible) “Yeah, I’m trying to find the trail! I’m somehow in this swamp!!!”

Cadet Carney eventually emerges from Mosquitoville and climbs to the summit of Weathertop, grumbling all the while. We make camp, cook up some spinach shells with cheese and alfredo sauce, burn the fire until near midnight, and retreat into our tents. 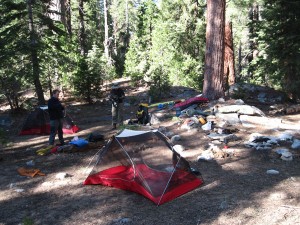 In a miraculous occurrence, the RTEF is completely fed and packed up by 9 AM, an encouraging start for our 9.5 mile return to the trailhead. Watching Carney disappear down the trail,  someone mumbles, “He runs as if the very whip of his master was behind him!”

The hike out is uneventful, save one incident that shall go down in the RTEF Tome of History.

Cadet Carney, who usually blows chunks at least once each trip, had thus far avoided any tossage of cookies. Since it usually happens on the first day and during a long ascent, we figured we were homefree on this one. Not so fast, my friend. Not so fast.

During the final miles of the descent, Director Blakeslee observed that the cadet was increasingly wobbly, incoherent, and just generally dazed. Perhaps it was the very hot day, the 9.5 mile hike out, or the fact that Sean had run out of water about three miles ago. Crossing the final stream just 300 yards from the trailhead/parking lot and freedom, Carney dipped his Nalgene into the stream and drank deeply. Too deeply. Again and again. Finally, he got to his feet, stepped upon the trail, paused, said nothing, and simply gestured to Blakeslee with an outstretched hand. The cadet then assumed the position, prayed to Allah, and began a series of mighty heaves of recently consumed water.

At this precise moment, two middle-aged mothers and their toddlers came merrily down the trail, talking cheerfully and enjoying the unspoiled purity of nature. They came across Cadet Carney just as he reached his second heave. Then his third. Fourth. Fifth. Sixth. Seventh. Eighth. Horrified, the women and children scurried away, shrieking in terror and panic, blindly running back up the trail ostensibly in search of the nearest ranger or suitable law enforcement officer.

Carney got to his feet, wiped his mouth, and happily announced, “Much better! Good to go!” He triumphantly marched the final few feet to his parked truck, tossed his pack into the bed, and formally announced the conclusion of this year’s Summer Solstice expedition.