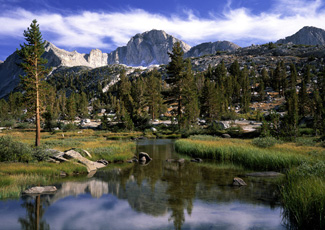 Today, the esteemed yet highly controversial Red Tomahawk Expeditionary Force unveiled their plans for the group’s 2011 Sierra adventure. Similar to the mob that gathers outside the Vatican prior to the selection of a new pope, so do RTEF cadets and other assorted hopefuls assemble outside the group’s San Gabriel Mountain retreat in eager anticipation of the announcement.

The RTEF has revealed that the South Lake – North Lake Loop, which traverses three epic passes and through one of the gold standards of the Sierra backcountry, shall be the featured expedition for 2011 (August 20-27). 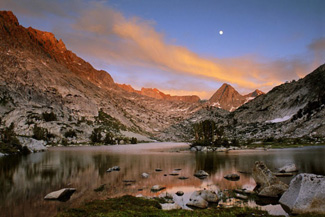 On the Saturday morning of August 20th, the RTEF shall depart South Lake and make a straight shot for Bishop Pass (elev. 11,972). From there, we shall enter Kings Canyon National Park and descend into Dusy Basin and down towards Le Conte Canyon. We join up with the John Muir and Pacific Crest Trails, conquer the diabolical Black Divide, celebrate with a swim at Helen Lake, and then muster our energy as we cross over Muir Pass (elev. 11,955).

Having crested the pass, we plunge into the heart of the trip, the exquisite beauty of Evolution Valley, known for its sensational backcountry lakes and towering mass of 13,000+ foot peaks. 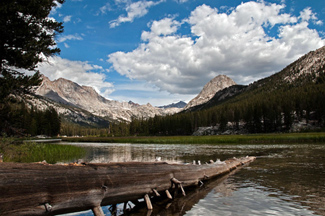 This 15 mile stretch of Sierra grandeur features a slightly declining trail; we’ll experience the many lakes and peaks of Evolution Basin before reaching Evolution Lake and the valley itself. High country meadows and creeks shall be our constant companions as we reach the south fork of the San Joaquin River. We shall travel riverside for three miles before making a turn at Pavilion Dome, where we’ll head northeast and up through Piute Canyon and along the edge of Piute Creek.

This shall bring us into the homestretch of the expedition, as we arrive into Humphreys Basin, camp at the familiar Golden Trout Lakes, then stare defiantly into the face of Mt. Humphreys as we summit Piute Pass (elev. 11,423) and avenge the defeat of 2010’s Summer Solstice Expedition! A swim at Loch Leven punctuates our final few miles before reaching trip’s end at North Lake. 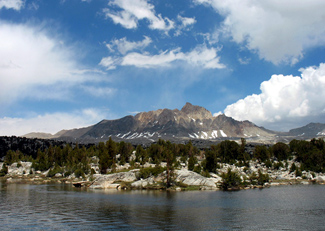 This is a 57 mile expedition, currently planned for a leisurely pace of 7 nights/8 days. We shall complete our sojourn on Saturday, August 27, with the option to stretch it an extra day into the 28th.

The RTEF calls upon you to join our ranks as we celebrate the majesty of the Sierra Nevada during the unquestionable peak of the season. And remember: this is a story you will tell your grandchildren….. and mightily bored they’ll be.