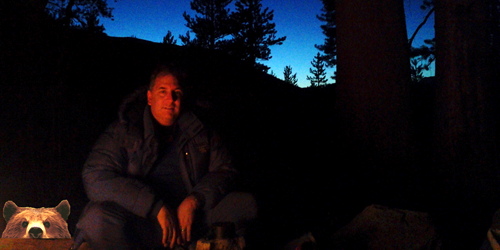 I was the last one to retire for the evening. Everyone else had turned in, and even those who’d vanished into their tent just 30 minutes before could already be heard snoring away. I quietly tip-toed around the many guy lines extending from the five tents in our camp, before finally entering my shelter and climbing into my bag. Faintly, I could hear the soothing waters of the Lyell Fork rushing down towards Tuolumne Meadows. Peace and tranquility were mine, and I would be the last one to fall asleep in the woods this night. 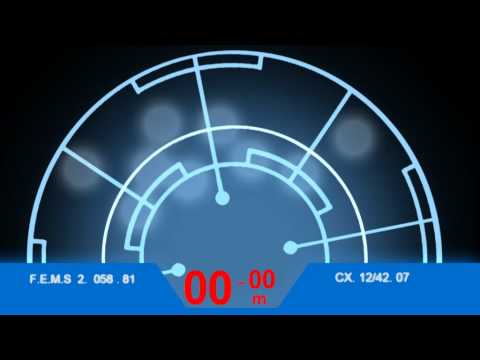 Or so I thought.

Not ten minutes after I’d zipped into my bag, I heard the sound of heavy feet upon dirt and leaves, just yards away from the tent. And then, closer. Closer. Just outside the tent, on Robin’s side.

Leaning over Robin, I unzipped the vestibule door about three inches, shined my headlamp outside, nodded, and then zipped the door shut.

Subsequent shouting and clamoring did little except wake some of my companions, while others continued their slumber. Finally, I was forced to crawl out of the tent on my side and holler at the young black bear, who was in the middle of licking what appeared to be a stick of butter. “Butter?” I wondered aloud, before returning to the matter at hand. I increased my shouting and the bear retreated into the shadows.

Upon closer inspection, I got a good look at the food bag that the bear had easily torn apart. “Whew… not mine.” I said to myself. “Now I can sanctimoniously berate the guilty about such irresponsibility.”

I meandered over to the tent of Director Blakeslee and Cadet Moon, where faint snoring sounds could still be heard. Only after a disturbing amount of volume and persistence was I able to wake the cadet, and confirm that, yes indeed, it was their food bag. “Who carries two sticks of butter?” I rhetorically asked the cold, starlit night. “Might as well just wipe it all over yourself and ring the dinner bell.”

By now Cadet Carney, an attorney well versed in dealing with predators, rose from his tent and spotted the bear attempting to sneak back into camp. Fearlessly, Carney charged the young animal, and the poor creature, having never seen a lawyer before, dashed up the hillside to the south…

… and directly into the camp of the Australian couple who’d rudely set up their camp within close proximity of ours. Not a minute had gone by when an accented female voice, filled with terror, began screaming. Our sniggers turned to guffaws turned to full bellied laughter, echoing off the canyon walls. Finally, the bear left the Aussie camp, but not before making off with one of their backpacks.

By now, Blakeslee was (finally) awake, along with Director Silva and a mildly frightened Cadet Feghali. There were many long minutes of uninspired debate. Finally, for those people irresponsible enough to not bring bear canisters, their food was hung from a branch about eight feet above the embers of our campfire. “Not sure that’s high enough…” I muttered, but we pacified ourselves by attaching Carney’s spanking new bear-bell to the sacks of food. If nothing else, we’d get an early warning. With a bit of trepidation, we all retired back to our tents and began to once more drift off to sleep.

This time, Cadet Moon, not willing to again wait for her tentmate to roll from bed, stepped outside and let loose a mighty RAAAAAWWWWR!!

“Is it EATING the food?!?!?!” shouted a concerned Director Silva from the confines of her tent (which was also closest to the hanging sacks). “KAELYN SAYS IT’S EATING THE FOOD!!!” shrieked Moon in response. Silva, Blakeslee and Carney crawled from their shelters and joined Moon in chasing off the much bigger animal, herding it to the west and into the dark of night.

“THERE’S ANOTHER ONE!!” came a sudden call from Carney. “To the east, man, by Blakeslee’s tent!!! I got readings in front and behind! THEY’RE COMING OUT OF THE GODDAMN WOODS!!!”

Lying in our tent, Robin and I calmly listened to the crashing and panic-induced running by humans and quadrupeds alike. It was now close to 2 AM. Robin gave me an expectant look. “Nope.” I declared. “Not getting up.”

Several minutes later, Carney came over and spoke quietly from outside the tent. “They broke through the perimeter. Definitely inside the barricades. Clean signals.”

Before I could acknowledge his report, the female Aussie again began wailing like a banshee. Carney deadpanned, “Must be back in their camp.”

“Kaelyn, Kristin and Jonathan are going to rebuild the fire, seal off the air ducts, and stay awake to guard the food. Sun will be up in a few hours.”

I grunted my acknowledgement. “Tell them to come wake me if they want relief. I don’t expect it from that trio of martyrs, but tell them anyway.” Carney gave a return grunt and trudged away.

Dawn broke, and the night’s events were recounted, analyzed, and recreated. Inventory was taken. The juvenile bear, clearly working in conjunction with its mama, had decimated the Blakeslee/Moon stash, making off with full bags of Skittles, M&Ms, and homemade granola. Pita bread was also missing, along with pancake mix and the aforementioned sticks of butter.

It was a long leisurely morning of assembling our gear. Finally, after all the fingers had been pointed, blame had been assessed, and future counter-measures had been pledged, we loaded up our packs and continued toward Donohue Pass and beyond to Thousand Island Lake, loud laughter our ever-present companion.