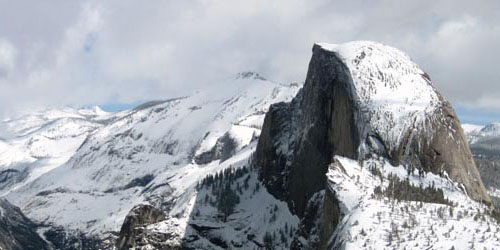 November 7, 2010
Director Franz negotiates with the Yosemite Mountaineering School for six slots at the Glacier Point Ski Hut in early March. The die is cast.

March 5, 2011 (Saturday)
A party of six becomes seven becomes six. Jonathan’s Trans Sierra tentmate (sounds like a Don’t Ask, Don’t Tell experience) has also signed up, temporarily boosting group number to seven. David’s last-second addition shall prove beyond fortuitous. Meanwhile, Cadet Heller is a no-show, dropping us back down to six. The plan calls for Directors Blakeslee, Silva, Jarchow and Franz to be chauffeured by Cadet Feghali to rendezvous with D. Frost in Oakhurst, CA. Departure point, San Gabriel at 1 PM. Extended snack research delays Feghali until 2:18 PM. She is mostly forgiven.

6:15 PM
All humans refueled along with the Hummer Assault Vehicle, as Director Silva takes the wheel. A few miles north of Fresno and Silva inexplicably breaks the water pump on said vehicle, steam bellowing from beneath hood as engine enters life-saving mode before sputtering to a halt. Team unanimously blames Silva for incident.

March 6, 2011 (Sunday)
Hopes of a 10 AM trailhead departure are laughable. Group organization is inconsistent, at best. Director Silva marvels at Cadet Feghali’s collection of bags, luggage, and cosmetics. Amidst drizzle, then heavy wet snow, then drizzle again, the group snaps into their skis and cheerfully departs the trailhead shortly before noon. 32 feet later, Cadet Feghali falls for the first of many times.

1:23 PM
Progress is good over first 3.2 miles, though blisters appear early and often for Jarchow, Feghali and Blakeslee. Jarchow stops to sit down and change socks, only to be immediately surrounded by carrion birds expecting her to never get back up.

4:30 – 5:15 PM
Entire group successfully navigates all 10.5 miles to arrive at Glacier Point “Jabba” Hut, arriving in widespread increments. Experts Frost and Blakeslee arrive first, followed by fitness addicts Silva and Feghali. Jarchow and Franz appear last, emerging from the gray mist like shell-shocked trench fighters of the Somme. Introduction is made to hut keeper Bernie, a Nordic Mexican who is as affable as he is knowledgeable. Soon, all group members have armed themselves with hot drinks and spots on couches near a wood stove, with appetizer nachos soon provided courtesy of the magnificent Bernie.

Though tired, RTEF morale is high. A dinner of chicken skewers follows shortly, ample dessert, and more hot drinks and fire. Director Silva is the first to melt into her bunk (she is the oldest, after all), while the rest of the group slowly follows suit.

March 7, 2011 (Monday)
Snow has fallen throughout the night and through the morning, yet occasionally the storm opens a peephole for sunshine and images of Half Dome to appear through the clouds. RTEF members initially show little sign of life on this, our layover day, as our group alternates between breakfast, reading good books, and stepping outside whenever the mood takes.

Late morning and the clouds release their grip on the region; the power and glory of the views are opened. Half Dome in all its splendor, Nevada Falls and Vernal Falls, all visible as the team collectively emerges from the hut door. Cadet Feghali attempts to leap off the edge in joyous ecstasy, but runs shy of the needed energy and comes up short by about ten paces.

The women retreat back inside the hut, Blakeslee and Frost prepare for a half day ski reconnaissance, while Franz meanders the short distance out to Glacier Point, and has the entire spot to himself. Utterly alone, no cars, no crowds, not a sound but the distant roar of Yosemite Falls echoing across the valley. For one moment, he may have found peace.

Director’s Note: Through either fact or convenient legend, Glacier Point is a bit sacred to outdoorsmen. Stories have it that, in his bid to convince Teddy Roosevelt to turn Yosemite into a national park, John Muir guided the president to Glacier Point, where the views and majesty would surely seal the deal.

Following a light lunch, Silva, Feghali, Jarchow and Franz briefly explored the surrounding environs, until Feghali returned inside to finish her book assault. Later, her assertions of having spent “all day” outside are met with derision by, well, pretty much everyone. As light fades, Silva, Jarchow and Franz receive a free Bernie Clinic on the basics of Nordic skiing, valuable info that would have been even more valuable a day earlier. Frost and Blakeslee return safely from their outing.

Dinner of enchiladas, beans and rice, and we ponder if Bernie got his ski experience in the Mexican Alps. As ever, Directors Blakeslee and Franz are the last to retreat to their bunks, both hating to pay for the same real estate twice. Instead, they throw more wood into the stove and, in hushed tones, discuss where next the RTEF shall go, what gear shall be needed, and who they can con into joining them on the next adventure.

March 8, 2011 (Tuesday)
The other hut occupants are an eager bunch, bounding from their beds between 5 and 6 AM in their bid to race down the mountain, presumably to get superior snow conditions, or more likely because some Sierra Club dweeb incorrectly taught them to always get on the trail before 7:00 AM. The RTEF is a more calm, calculated bunch, rarely in a hurry for much of anything save dessert or pack cookies.

Director Silva, having not showered in a now personal record 48 hours, seems eager herself to depart, and slowly our group is trailbound just before 10. There are no clouds in the sky, the sun is bright, it is a glorious day of legend. There seems a quick and determined pace in many a step, yet Jarchow and Franz, questionable physical conditioning notwithstanding, are determined to enjoy the beautiful weather, take photos, and also take their damn sweet time. They emerge from the wilderness and back at the trailhead shortly after 2 PM, their associates somewhat patiently waiting.

Pizza and beer in Oakhurst go missing at an alarming rate, before the half dozen team members cram once more into D. Frost’s generously supplied transport vehicle. In Fresno, the abandoned Hummer has been repaired, and David bids farewell as he commences his drive westward to Monterey. The remaining five clamber into the Hummer and initiate a blazing run down Highway 99, stopping only once for a final resupply of fuel and ice cream. Return to San Gabriel port at 9:35 PM.