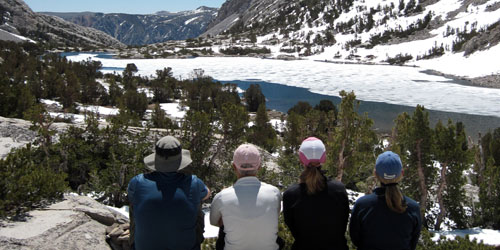 (All photos, click to enlarge)
What follows is a series of press releases, communiques, and threatened legal actions in the days leading up to the 3rd Annual Summer Solstice Expedition.

The time has come for the 3rd Annual Summer Solstice Expedition, one of the mainstays of the world-renowned yet highly exclusive Red Tomahawk Expeditionary Force. This will be the third straight year in which the RTEF has celebrated the summer solstice with a trip into the Sierra high country.

For 2010, our trip dates are June 18-20, and our plan is to return to the site of the first ever Summer Solistice Expedition. Over Piute Pass and into Humphrey’s Basin we shall go, a truly beautiful area dotted with many lakes for fishing and many corners for hiking.

As of right now, there are two departure slots: 1) Thursday night, June 17th, with an expected stay in a Bishop hotel, or 2) Bright and disgustingly early Friday morning departure (the 18th).

We shall hit the trailhead late morning on Friday, and begin our moderately strenuous trek towards Piute Pass (11,423 feet). From there, we’ll drop down into the basin and choose a site that will serve as our base camp. Saturday will be a day of fishing, hiking, or if you’re Carney, sitting and reading a book. Understand, that is not frowned upon. This is a low effort trip geared more towards relaxing and enjoying some high country scenery, and should not take any years off of your life. Sunday, late morning/early afternoon, we will pack up and return to our assault vehicles for the voyage home.

Most importantly, this trip counts as one punch on your RTEF Trainee Card. Some of you are very close to attaining membership… this trip just might put you over the hump. And remember…. his tomahawk is red. Is yours?

Pasadena, California – In an announcement that has sent shock waves through the self-congratulatory covens of puff-ball paladins and gore-tex gueniveres of the southern california backcountry militia, Mighty Whitey announced that, after an 8-year hiatus from backcountry mountaineering and wilderness misadventures, he will return to competition in the 3rd annual RTEF Summer Solstice Expedition.

Whitey, who last donned an internal frame pack for the now-infamous 2003 Yosemite High Sierra Camp thunderstorm debacle, which left 6 of its 8 members emotionally traumatized and out of booze on the second day, has been absent from competition in recent years, living as a recluse in the wilds of western pasadena. Adding to his woes were reports in the press of a relationship with an older woman who was said to have been complicit in his addiction to five-star hotels, spa treatments and room service.

When reached for comment at his Pasadena home, Whitey would say only “Bring it, bitches. Service my python like the poser sluts that you are. Mighty Whitey is bringing NASCAR style to your F1 world. Your ultralight groundpads couldn’t survive one of my beer farts.”

Said industry analyst Jeff Franz, “I have no idea why we invited him. He’s always been a dick, and I hope his pack disintegrates in a humiliating stream crossing.”

San Francisco, CA – In a clear response to the announcement that Mighty Whitey would soon make a return to the backcountry wilderness, NorCal-based agencies Greenpeace and the Sierra Club were quick to reveal their plans to put a halt to Whitey’s historic comeback bid. Email blasts to all members, calling for support and additional donations, were accompanied by a clear strategy to create a blockade that would prohibit Whitey’s attempt to, once again, smell fresh air and feel cool alpine waters on his soft, urbanized feet.

Greenpeace spokesperson and Director of Eco-Terrorism, Ertha Muphinn, had this to say from the organization’s San Francisco offices. “We’ve established check points at all eastside locations where the creature has been known to surface. Schat’s Bakery in Bishop, the men’s bathroom in Inyokern, and all 395 convenience stores known to sell chocolate donuts have been completely locked down. Don’t worry. We’ll find, isolate and cage the beast.”

Muphinn continued, “It’s actually been 18 years since the Whitey completed a real backpacking trip. His last known sighting in the true wilderness was the Australian Outback in 1992, yet somehow he slipped through all inter-agency detection measures and returned to the Northern Hemisphere. His more recent half-attempts up Mt. Whitney and beer-hauling expeditions between tent resort villages hardly qualify as backcountry exploration.”

Meanwhile, Sierra Club’s own Enforcer of Morality, Jean Swass, was succinct and precise in her comments about what Whitey’s comeback might mean to the Sierra high country.

“During these two blissful decades in which the creature has hibernated in his natural indoor habitat, many eco-systems have partially recovered, and eastern Sierra soil toxicity levels have returned to near-normal levels. Birds have begun to migrate back to the region, and over a dozen rainbow trout now grace the high country lakes. Only his continued, and hopefully permanent, absence will provide a chance for these species and habitats to recover completely.”

Sean M. Carney, lead counsel for the Red Tomahawk Expeditionary Force, immediately disavowed any responsibility for the counter-measures. “Officially, the RTEF has no comment on the matter. Opening up the backcountry to all peoples, even those of a cretinous nature, is one of the RTEF’s stated goals. On a personal level, as long as the Whitey carries enough scotch for me, he’s welcome to attend.”

VIA FACSIMILE and E-MAIL / COUNSEL for Greenpeace and Sierra Club
Re: Cease and Decist, Impending Legal Action

My client, Mighty Whitey, wishes me to convey his vehement denial in connection to your slanderous and mostly untrue statements about the Sierra Mountain Range phenomenon known as “Whitey Waste.” First, your claims that my client has not complied with federal and state law by having an Environmental Impact Report prepared in advance of his impending sojourn to the Sierra range are simply untrue. We have conducted extensive testing of the toxic effects of “Whitey Waste” on the environment. These tests included sequestering such waste in cemented 40 gallon drums at the facility at Yucca Mountain, Nevada. This facility, as you well know, is certified to hold radioactive waste for up to 10,000 years. Based on these tests, we can certify that “Whitey Waste” will not have an adverse impact on the environment, as it several weeks, if not even a couple months before said waste polluted the aquifer under Yucca Mountain.

This evidence stands along side years of anecdotal evidence showing that the toxic effects of “Whitey Waste” are manageable. Your reports of plumbers servicing the Blakeslee household developing “Blakeslee Wasting Disease” show no evidence of causation to my client whatsoever. Their medical ailments simply happened to coincide with events in which they attempted to unclog the noxious and corruption filled pipes under his house. And it simply is not true that the small pet cemetery in his backyard is filled with the furry victims of his toxic exposure.

As you know, all backpacking activity has some deleterious effect on the wilderness. Mighty Whitey’s expeditions are no exception. But your exaggerated accounts of flocks of birds falling dead from trees at exposure from his flatus are clearly slanderous. You must cease and decist all such statements at once or we will pursue all available legal action against you.